Who holds their only American concert (of the year? decade? who knows…) on CHRISTMAS!?   In a country filled with Christians who are busy celebrating the holiday, is a Las Vegas concert on the holiest Christian holiday really a great idea?  It kind of excludes a lot of his fans.  I know lots of his Korean fans are Christian too and are busy traveling and spending time with family.  I am very sad and angry about this.  If the rumors/loosely believable facts are true Rain has settled on this spring to start his compulsory military service, which means he’ll be out of the public eye for two years starting then.  ::sigh:: I’m just angry I can’t go and that he decided to host his concert on those two days.  (December 24, 25th.)  If YOU want to go check out ticketmaster here.  (Since when did he become “THE” Rain?)

Here he is looking deceivingly cute and innocent: 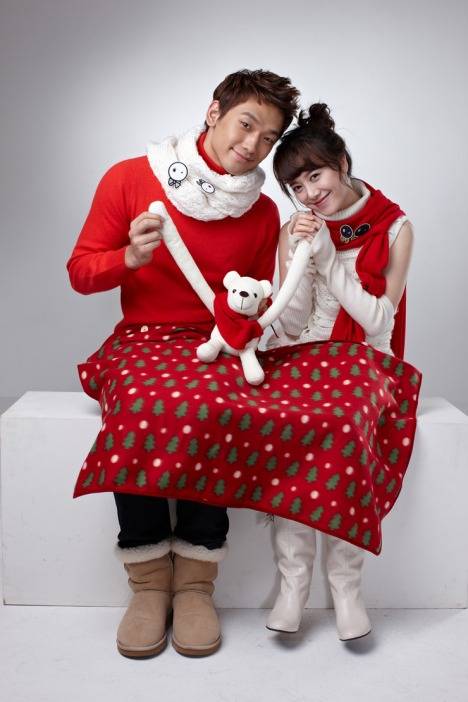 And speaking of military service, at least we got our Gong Yoo back!  Here:

That’s something to smile about!

Ok folks.  I saw the film opening day, and I was kind of disapointed that the theater I went to pushed it to a tiny side theater.  Oh’s well’s.  Here goes.

When you see a Wachowski brothers movie you have to expect the unexpected.  They pull out all the stops visually and sometimes things don’t make the most sense the first time around.  Unless you’re REALLY paying attention – and believe when Rain’s on screen, I’m paying attention!  First of all, this film did not let Rain stretch his acting muscles – just his physical ones. (Which, as a squeeling fan-girl I appreciated very much.)  His English is much improved over older clips and songs, I know he’s working hard and that over time his abilities will increase 10 fold.  That said, what did I think of the movie?  Man, what a bloody, bloody splash fest of a film THAT was!  Dear me.  I was prepared slightly by the local newspaper reviewer.  (“Ninja Assassin sets a new standard for film gore.”) So, I knew it was going to be bad, but not bad enough to make this non-squeemish girl cringe and try VERY hard not to look away.  I will say this, if you can make it through the opening scene, things get better and if I may say so – a bit more stylized and less, um, blech-y.  Naomie Harris was very good in her role and I liked her.  She was a good strong character who wasn’t afraid to get her hands dirty, but knew better than to just jump into the middle of a fight thinking she could help (most of the time.)  I was disapointed by how little dialogue that Rain had.  Did the directors think he couldn’t handle it, or was it part of his ninja character that he had to stay mysteriously quiet?  I’m not entirely sure.  I do know that I probably got a few dirty/quizical looks or questioning thoughts during one scene where a random henchman-like character says:  **SPOILER ALER** “He doesn’t look like a killing machine to me, He looks like he belongs in a boy band.”  OH MAN.  That almost had me on the floor rolling with laughter.  I had to cover my mouth and take deep breaths to calm down.  In the heavier fight scenes Rain wowed and proved that his 8am-5pm everyday for 9 months training paid off – in a big way.  I only spotted a few scenes that were obviously  his stunt double.  Other wise the man whooshed his way through the choreography.  I remember thinking 3/4 of the way through the movie “Poor Rick Yune!” Poor man has only one scene in which you can actual see his face, not very good for an actor that already has very few apperances in films.   I find it funny that for most of the articles about this film he was billed before Rain.  Kind of ironic if you ask me.  In all, this film really was all about the action, and it’s nearly non-stop.  I think critics are generally full of crap and they get movies wrong.  Most of them are looking for films to be artsy, realistic and have deep meanings.  In general, the public like movies that are entertaining and show them something they don’t see in daily life or have never seen before and in this sense, Ninja Assassin delivers.  I want to warn anyone who is slighly squeemish or can’t handle violence against seeing this movie.  Wait for the DVD and fast forward through the tough stuff and you’ll get to at least see Rain for a few minutes!  My final rating:  6.5/7 out of 10.

If you like action/kung-fu/martial arts movies or Rain – check out Ninja Assassin!

I wish Rain would hold MY hand!

Book: breezing through some manga Movie: Chatrapathi tomorrow? Series: Waiting for Fugitive to start got a few on the list, & internet @ home coming this week! Music: Currently addicted to Telugu soundtracks. This week it's Aarya 2.